skip to main | skip to sidebar

I promise this will be the final post that has anything to do with cars in general and Citroën cars in particular! BUT we did just spend the past holiday weekend (Day of Pentecost) in and around the Cathedral city of Reims, where the 40th anniversary of the Citroën SM car was celebrated in a 3-day, jam-packed series of events. 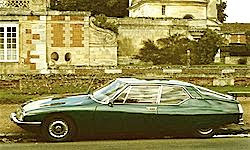 With its super-streamlined, futuristic shape, its powerful Maserati engine capable of cruising comfortably at 120 mph, and its dramatic interior styling, the SM was considered the flagship vehicle of the Citroën fleet during its five years of production - 1970-1975. Around 13,000 were produced, with maybe 2400 being exported to the US. 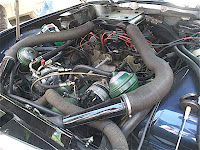 Production tailed off dramatically during the fuel crises of that era, and when the Peugeot car company bought out Citroën, they shut this model down. 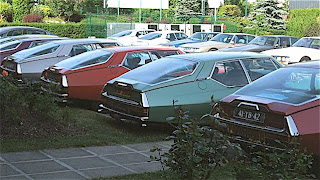 In the States, the sight of one of these cars is a rare event (unless you live in First Valley, Inverness, that is!), so you can imagine how our jaws dropped when we stepped out of our motel room on Saturday morning and were greeted by this sight: a parking lot containing ONLY Citroën SMs.

During the course of the weekend, more and more SMs and their owners joined the gathering, arriving from all over France, as well as several from Belgium, Holland, Germany, Monaco, Switzerland, England and Italy. Then there were the SM owners from "overseas" who attended without their cars -- from as far away as New Zealand and, of course, California! 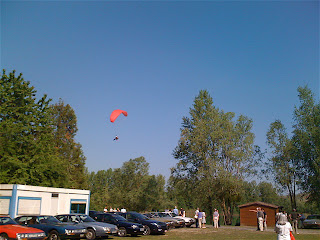 Wherever a group of these cars parked, people flocked to check them out. At one of our many stops, one fellow circled several times in his Ultralight to get a good look.

And no matter how well individual owners might know and love their own vehicle, they never tired of checking out each and every other car at the rally, looking under hoods, in the trunk, checking what kind of wheels, headlights, original paint, modified bits and bobs.

French law forbids modifying the car from its original design, but other countries don't seem to care and there were some rather extreme re-design elements on a couple of the German and Swiss cars, that had the French owners clucking with disapproval. 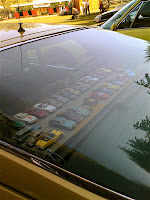 This doesn't count as an official modification, but owner of this car made a cute display of model cars on the rear window ledge of his vehicle. 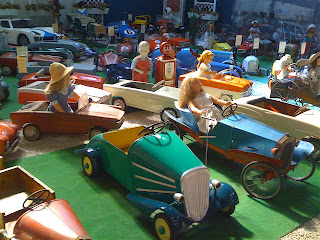 After being surrounded by so many of these beautiful SM cars (150 by the end of the weekend), I found my eyes glazing over during the group visit to the Reims Automobile Museum, where there were vintage cars of every other make and model on display. Until, that is, I came across this amazing room full of kiddie model cars, and wanted to jump into one and try it out for myself.

The organizers of the weekend made sure that a great deal of time was spent in the cars, driving from one event to the next through the beautiful Champagne country of the River Marne and River Aisne. People went at their own pace, but there would often be at least 20 SMs rolling along a highway, one behind the other! Since we had no car of our own, this gave us the chance to ride with other SM owners, which, looking back, was really one of the highlights for us.

These were ordinary French people (or German, Dutch, Swiss, English, etc.) from all walks of life, brought together by their love for this car. Not a single Parisian among them! And no one asked or told what their daily work was. For all we knew, we were riding with captains of industry or longshoremen. Only one person, Thierry, mentioned his occupation, and then only because he rather shyly commented one morning at breakfast on how great it was to be up and about during the daytime because he worked at night. We asked him what he did, and he explained that he is a baker working from 11 pm to dawn every day, baking all the delicious breads that we so take for granted when we pop round to the local boulangerie. Ever since he was a small boy, he added proudly, he always wanted to be a baker. And he owns an SM! He and his wife had driven from eastern France near the Swiss border to be at the rally. 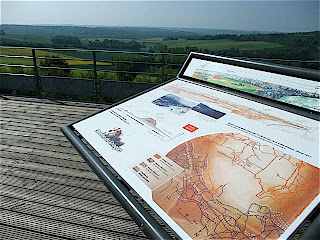 It's hard to go anywhere in Northern and Eastern France without coming up against memories of both World Wars. One of the destinations on Saturday's agenda was a visit to the Caverne du Dragon, located on the Chemin des Dames, a long roadway that runs across a plateau, called, ironically, Plateau de Californie.

During WWI, a fierce battle was waged, not only for the rolling landscape surrounding the museum, but also for control of a deep, enormous, underground quarry that stretches a great distance beneath the fields and the roadway.

Occupied by the French troops at one end and the German troops at the other, the battle waged long and bloody under unimaginably brutal conditions, and with unspeakable cruelty inflicted on soldiers of both sides of the conflict, very often by their own officers. We were reminded of the early Stanley Kubrick film, Paths of Glory, that so poignantly and devastatingly captured this era of warfare.

Today, the museum is dedicated to the memory of all who lost their lives. A series of tall metal black posts on the hillside commemorates the lives of the French Senegalese soldiers who fell during this particular battle. 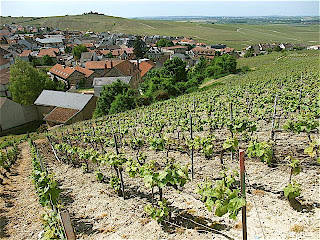 As well as WWI monuments and memorials, this particular region of France is most famous for its fantastic champagnes: Veuve Clicquot, Pommery, and Mercier, to name just a few of the bigger brands. Vineyards rise up on the chalky hills around almost every small town in the area, with little tasting rooms (dégustation) lining the main streets.

A museum, near this vineyard is devoted to explaining the production of champagne, with its incredibly strict protocols at every step of the process, from how to prune -- 3 and only 3 choices there! -- to the cutting of the stakes, the training of the vines, the timing of the harvest, etc. 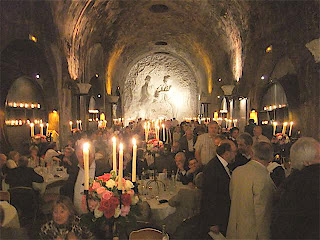 Saturday evening, we were able to taste the fruits of these precise labors at the Gala Banquet, held 30 meters below ground in the Caveau Bacchus of the Champagne House of Mercier, founded in 1858.

In this grand vaulted, candlelit cellar, surrounded on every side by several kilometers of wine storage tunnels, we feasted on the following: 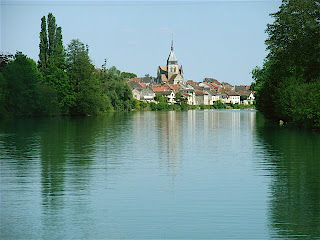 By Sunday morning, we were all in need of some quiet leisure time! Geneviève Fraleux, the fantastic organizer of the whole weekend, did not disappoint.

The weather continued to be glorious, warm, sunny, calm. After a short visit to the charming village of Reuil and another sumptuous luncheon under a tent beside a very pretty lake, we boarded a cruiser for a gentle ride along the River Marne, passing several more villages. 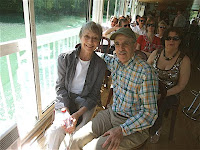 The somnolent pace of the boat and the warm temperatures, along with the vast quantities of food and wine we had enjoyed, had us all nodding off, although we managed to perk up a bit for this souvenir snapshot! 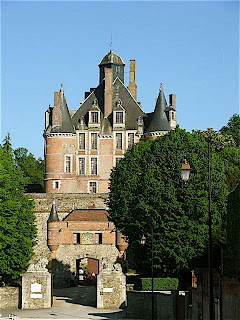 Our final "tourist" stop was the glorious Château de Montmort in the small town of Montmort Lucy. Originally a fortress, it was purchased in 1074 by Rémond de Montmort, whose descendants have lived here ever since, transforming the fortress into this stunning XVIth century castle. In the late afternoon sun, against the picture perfect blue sky, it looked like something out of a fairy tale. 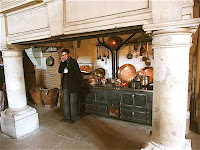 Our guide this time was quite extraordinary. With an encyclopedic knowledge of every stone and pillar in the place, he proceeded to share every part of it with us. Of indeterminate age and with a voice that verged on that of a castrati, he trilled and twirled his way through the rooms, skipping here and there, rolling his eyes dramatically, waving his arms like a young ballerina, swooping his head from side to side and up and down as the timbre of his voice followed suit. Or vice versa. A mesmerising theatrical performance that kept his audience captive to the last word! 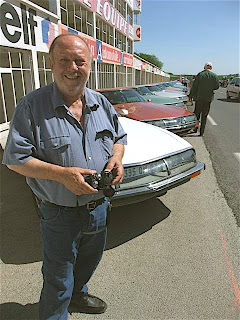 At the end of the day, though, it did all come back to the SM cars. To Jerry Hathaway, proprietor of SM World in Southern California, who has devoted his entire adult life to this car, and is considered a legend in France and throughout the world for his knowledge and passion for all things SM. 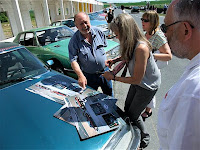 He came to the rally with his wife, Sylvia, who holds the land speed record for SM cars at the Bonneville Flats -- over 200 mph! People waited eagerly in line for them to sign posters. 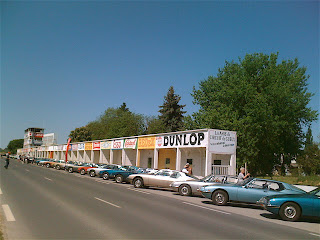 The final event took place at the empty, desolate Circuit de Gueux, just outside Reims. Formerly a renowned race track for cars and motorcycles, it now stands a bit forlornly on a stretch of two-lane blacktop, surrounded by farm fields.

But for one glorious hour on Monday, Day of Pentecost, under clear blue skies and hot, hot sun, over 150 Citroën SMs lined up in perfect angle formation in tribute to this high-performance, beautiful car.


And we were so glad to be there!